Legend of the Haggis - A True Story

I was so attached to the dear, dear Highlands and missed the fine hills so much. There is a great peculiarity about the Highlands. – Queen Victoria 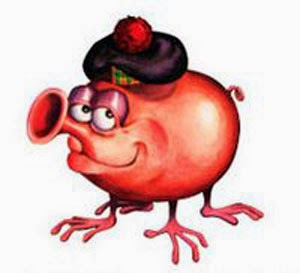 A dish that epitomises Scottish tradition and culture, the haggis is loved and revered around the world. The small pudding, with its oaty texture and unique spiced flavouring makes for an interesting delicacy; and with anything interesting, we as humans want to know more about it!

Although world famous, there is still a certain mystery surrounding the dish. What is it made of? Why is it so loved in Scotland? Is it really an animal that is hunted in the Highlands?


In fact, according to a poll of 1,000 US visitors, one third of Americans that visit Scotland believe haggis to be a real but elusive creature that is actively hunted throughout Scotland.

So why exactly do so many people believe haggis to be real game, and what exactly is the story?

A small, rough and scruffy creature with four legs, the wild haggis is said to be native to the plenteous mountains in Scotland. It scurries on four legs, with the legs on one side of its body significantly shorter than the others. This allows for easier, more balanced movement around the steep sides of the Scottish hills and mountains. You can tell the male and female haggis apart because each has its short legs on opposing sides. Legend has it that this is because it makes for an easier meeting when the destined couple are running round the mountains. The creature itself however is hard to find, even during ‘haggis hunting’ season. There is no hard evidence to prove the existence of the mysterious critter…yet!

Although a fantastic story, we at Speyside Specialities make our own haggis with a delicious blend of traditional Scottish oats, spices, onions and seasoning with only the finest delicate meats. We are in fact famed for our distinctive haggis recipe!

However, as the saying goes, there is no smoke without fire, and the legend of the haggis is certainly a strong one. With the vast uninhabited countryside, strewn with ample forests there would certainly be plenty of hiding spaces for this wee creature. In Scotland it could be quite possible for a small slippery ‘haggis like’ creature to elude detection.

Whatever the truth, a bit of mystery never goes unwelcome with the bustling tourist industry. Scottish culture is laden with myth and legend, and that is what makes us all the more interesting!

at 6:27 AM
Email ThisBlogThis!Share to TwitterShare to FacebookShare to Pinterest